ECG Love Tattoos Just For You

You are a dynamic person, personality. You want to express your love with the person you love, want to live up to what you want. You love the art of the body, want to own a tattoo but afraid of pain. So, this is exactly what you need. All you need for a party, a date, or just a casual day out for coffee with friends. Express your personality, express the beauty of this subtle art. Buy it now!

1. According to a survey, more women than men in the US have tattoos.

When it comes to getting inked, 59 percent of women have tattoos compared to 41 percent of men, according to a new poll released by the Oxygen Network and Lightspeed Research. What’s more, 40 percent of women made their tattoo experience a shared one, often getting inked with friends and loved ones. Apparently women use the “bring-a-buddy” approach to tattoo parlors, just like they do with public bathrooms.

Mixed with coal dust, urine was used in some cultures for tattooing. You have to wonder as to who thought of this combination – not to mention how and why.
“Hey look! You peed in the coal dust.” – “Yeah… Hey, I know! Let’s get a sharp object, coat the tip in some of my coal-pee, and scratch it into your skin!” – “Dude!”

Todays Tattoo inks consist of pigments combined with a carrier. Tattoo inks are available in a range of colors that can be thinned or mixed together to produce other colors and shades. Most professional tattoo artists purchase inks pre-made (known as pre-dispersed inks), while some tattooers mix their own using a dry pigment and a carrier.
Pigment bases: Manufacturers are not required to reveal their ingredients or conduct trials, and recipes may be proprietary. Professional inks may be made from iron oxides (rust), metal salts, plastics. Homemade or traditional tattoo inks may be made from pen ink, soot, dirt, blood, or other ingredients. Heavy metals used for colors include mercury (red), lead (yellow, green, white), cadmium (red, orange, yellow), nickel (black), zinc (yellow, white), chromium (green), cobalt (blue), aluminium (green, violet), titanium (white), copper (blue, green), iron (brown, red, black), and barium (white). Metal oxides used include ferrocyanide and ferricyanide (yellow, red, green, blue). Organic chemicals used include azo-chemicals (orange, brown, yellow, green, violet) and naphtha-derived chemicals (red). Carbon (soot or ash) is also used for black. Other elements used as pigments include antimony, arsenic, beryllium, calcium, lithium, selenium, and sulphur. Tattoo ink manufacturers typically blend the heavy metal pigments and/or use lightening agents (such as lead or titanium) to reduce production costs.

Carriers: A carrier acts as a solvent for the pigment, to “carry” the pigment from the point of needle trauma to the surrounding dermis. Carriers keep the ink evenly mixed and free from pathogens and aid application. The most typical solvent is ethyl alcohol or water, but denatured alcohols, methanol, rubbing alcohol, propylene glycol, and glycerine are also used. When an alcohol is used as part of the carrier base in tattoo ink or to disinfect the skin before application of the tattoo, it increases the skin’s permeability, helping to transport more chemicals into the bloodstream.
Other tattoo inks such as Glow in the dark ink and blacklight inks have been used for tattooing. Glow in the dark ink absorbs and retains light, and then glows in darkened conditions by process of phosphorescence. Blacklight ink does not glow in the dark, but reacts to non-visible UV-light, producing a visible glow by fluorescence. The resulting glow of both these inks is highly variable. The safety of such inks for use on humans is widely debated in the tattoo community.

3. Your skin is pierced 50 to 3000 times per minute by the tattoo machine when you get a tattoo.

4. The philosopher Confucius was against tattoos because he propagated that the human body is a gift. However, China’s stone sculptures depict men with tattoos on their faces as early as the 3rd century BC. 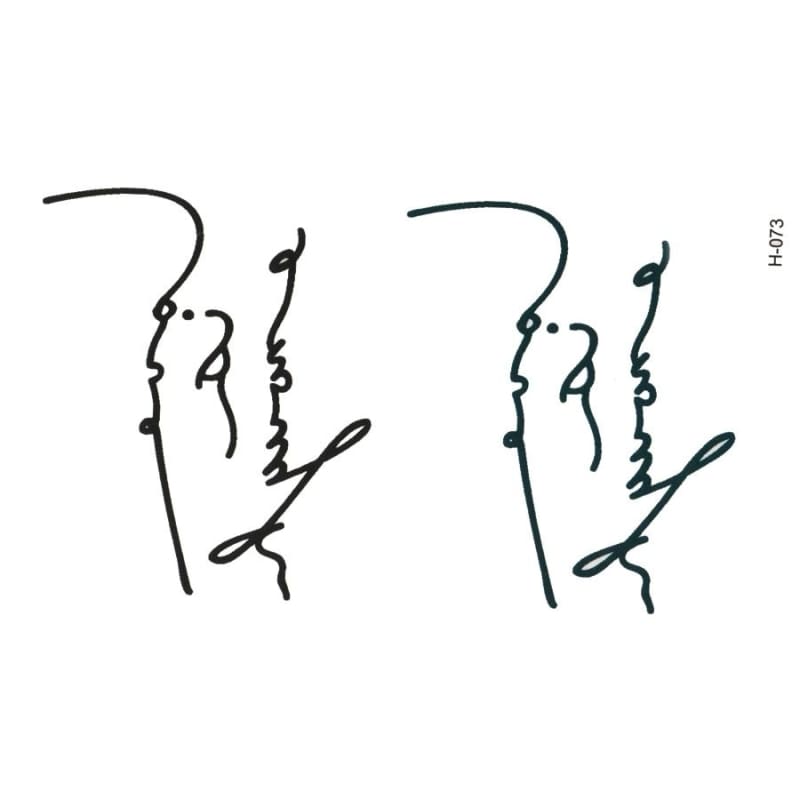