Bluetooth Motorcycle Speakers Just For You

Are you SICK and TIRED of not being able to have MUSIC while riding? Wouldn’t it be amazing if you could drive into the RHYTHM of your favorite music? Well look no further, MotoSpeaker is here.
Our motorcycle speaker is made from HIGH-QUALITY aluminum material. It is a MULTI functional motorcycle sound system that can play music using your SD card, Bluetooth or attaching the cable to any SMARTPHONE.
KEY BENEFITS:
DESIGN – The MotoSpeaker has been designed ergonomically and made anti-slip, stylish and elegant in appearance. Uses an LED display and has FM RADIO with 18 preset broadcasting.
WATERPROOF – Designed with a waterproof casing to ensure you can use it in absolutely any WEATHER. As a result, the speaker can handle any form of rain while riding! You can play music anywhere, anytime and ANY place.
BLUETOOTH – You can stream your favorite music or radio station from your smartphone with NO wires because of our technology! The MotoSpeaker can connect from up to 50 FEET away. Therefore you will never have to fiddle with WIRES ever again.
LOUDSPEAKERS – We have designed this knowing your motorcycle can be loud. That’s why it contains an insanely loud BASS booster with backup speakers to aid crystal clear sound, so you can still hear past 70MPH+.
The PATENTED application allows the speakers to connect DIRECTLY to your motorcycle battery so they NEVER need to be charged. It supports MP3/WMA music or AUX cable/TF card/USB to play. It’s the most convenient speaker AROUND.
SPECIFICATIONS:
Size = 20.5 x 6 x 6 cm (L x W x H)
Power Supply: DC 12V
Maximum Output Power: 10W x 2

The history of the motorcycle begins in the second half of the 19th century.

First steam-powered motorcycle was made during 1867, in the factory of famous bicycle inventor Pierre Michaux.

The Daimler Petroleum Reitwagen (“riding car”) or Einspur (“single track”) was a motor vehicle made by Gottlieb Daimler and Wilhelm Maybach in 1885. It is widely recognized as the first motorcycle. Daimler is often called “the father of the motorcycle” for this invention.

In the decade from the late 1880s, dozens of designs and machines emerged, particularly in Germany and in England, and soon spread to the United States. During this early period of motorcycle history there were many manufacturers, since bicycle makers were adapting their designs for the new internal combustion engine.

In 1894 Hildebrand & Wolfmüller became the first series production motorcycle, and the first to be called a “motorcycle”. It is estimated that somewhere in between 800 and 2,000 motorbikes were made – of which only a dozen survive worldwide.

In 1898, Triumph Motorcycles in England began producing motorbikes, and by 1903 it was producing over 500 bikes.

Indian began production in 1901 and Harley-Davidson was established two years later. By the outbreak of the First World War, the largest motorcycle manufacturer in the world was Indian, producing over 20,000 bikes per year.

The oldest surviving Russian-manufactured motorcycle, the Rossiya, dates from 1902.

During the First World War, motorbike production was greatly ramped up for the war effort to supply effective communications with front line troops.

By 1920, Harley-Davidson was the largest manufacturer, with their motorcycles being sold by dealers in 67 countries.

After the end of Second World War, American War veterans started gathering themselves into loosely organized motorcycle clubs. They become very famous after their portrayal in Marlon Brando’s 1954 film “The Wild One”.

A chopper is a type of custom motorcycle which emerged in California in the late 1950s. The chopper is perhaps the most extreme of all custom styles, often using radically modified steering angles and lengthened forks for a stretched-out appearance. Perhaps the best known choppers are the two customized Harley-Davidsons, the “Captain America” and “Billy Bike”, seen in the 1969 film Easy Rider. 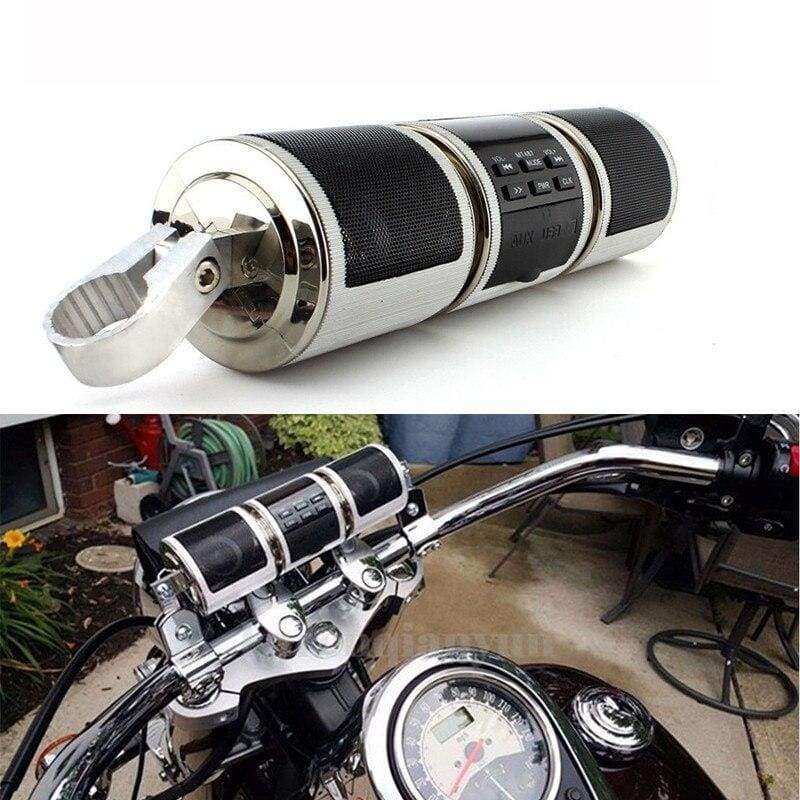 Bluetooth Motorcycle Speakers Just For You